(Dr. Davis is a previous recipient of a Nuckolls Fund award and a grant. He is a member of the Fund’s Board of Directors which annually selects recipients from proposals submitted by educators.)

Bob Davis is a graduate of the architectural engineering at Penn State University. His career began in 1984 with Sylvania in Danvers, Mass., near Boston, providing lighting applications support throughout the U.S. He moved on in 1990 to teach master’s level lighting courses and participate in lighting research at the Lighting Research Center at Rensselaer Polytechnic Institute for seven years.

He relocated to the University of Colorado at Boulder for nine years where he was an instructor in the lighting program within the Architectural Engineering department. Davis applied for and was selected for a $20,000 grant from the Nuckolls Fund for Lighting Education, and a $10,000 Edison Price Fellow grant. He earned his Ph.D. in Cognitive Psychology.

In 2007, he left CU to become Director of Product Innovation & Marketing for Litecontrol. He then relocated to Portland, Oregon three years ago where he is a Senior Staff Lighting Engineer/Scientist at the Pacific Northwest National Laboratory.

For the winning proposal you submitted to The Nuckolls Fund for a $20, 000 award, why did you decide that your topic would benefit the lighting program? My proposal was submitted in 1999, during my second semester as a faculty member at the University of Colorado at Boulder. I proposed expanding the program by adding two courses: an Exterior Lighting Course and an Advanced Lighting Systems course. My decision to focus on those two topics was motivated by seeing where I could add strength to an already very strong educational program. I had joined David DiLaura on the faculty there, and as he and I collaborated during my first year, we looked for opportunities to leverage our unique strengths to expand and build the program.

Have you followed up on the projects/activities you worked in since the conclusion of the award program? I have remained connected to the lighting program at CU Boulder ever since my departure in 2007. I visit the program at least annually, and have been fortunate enough to have had employers who support my involvement both in time and travel, but also through funding student awards or research projects.

Sandra Vasconez and Walter Beamer, the current lighting faculty members, have done an amazing job of maintaining and even expanding a strong lighting education program, and it’s been exciting for me to see how elements of the 2009 Nuckolls Fund grant continue to be integrated into the curriculum.

If you were to apply for a Nuckolls Fund award now, what topic would you choose? Or, if you would propose the same topic, how might you change the approach? If so, how and why? Education and information delivery has changed so much! It is changing almost as fast as lighting technology. So I would consider two approaches if I were to develop a proposal today.

For one, I’d propose instructional ideas for covering the basics of lighting that uses new instructional platforms and technologies, to engage both in-residence full-time students and other students through some form of synchronous or asynchronous distance learning.

For the second, I’d propose developing some new materials that cover the latest trends in lighting technology and design, from solid-state lighting to connected / IoT systems, and that cover the dramatic changes in the design of healthcare, education, and other types of facilities, and how those changes affect lighting.

The lighting industry is undergoing major changes based on the application of LED technology. What are its effects on designers, light artists, producers, commercial and residential users, today and in the future? It is changing everything! And for me, it has become the focus of all of my professional work, since I now work entirely in support of the US DOE’s Solid-State Lighting (SSL) program. The team at PNNL is part of DOE’s solid state research program operating under the direction of Jim Brodrick. We are involved with supporting the development of new SSL products and systems, as well as studying how people are using and reacting to solid state lighting.

One of our projects is at a senior care center in Sacramento where we are evaluating a color-tunable LED system. We not only documented the usual visual lighting metrics such as illuminance at task areas, but we also documented how the different LED spectra can affect non-visual metrics such as melanopic illuminance, which may in turn affect residents’ sleep cycles.

Some of the knowledge I had gained from the 1999 Nuckolls Fund grant is being applied to a long-term study we are currently engaged in of a high-mast exterior lighting system in the desert outside of Yuma, Arizona. Here, we are evaluating how that harsh environment affects LED luminaires.

The ability to control the optics, spectrum, and intensity of light produced by SSL systems, as well as use lighting as an interconnected part of other systems (both for receiving and sending information), will continue to provide groundbreaking approaches to lighting in almost all applications. These opportunities can be achieved using far less electrical energy than was ever before possible, which further drives the ongoing opportunities for innovation.

Has the Nuckolls Fund award had any short- or long- term effects on your career or you personally?  Since I was about 15 years into my career when I began my position at CU Boulder, the Nuckolls Fund grant and the related activities really helped me develop as a lifelong learner. I know that’s an overused phrase that can lack meaning, but given how dramatically our industry has changed since 1999, it seems that lifelong learning is the only way to survive! Since the grant forced me to dive into a few subject areas where my knowledge was lacking, it really inspired me to keep digging into things, keep expanding my own understanding, keep learning new stuff.

On a personal level, these projects are really all about the people. As part of the Nuckolls project, I forged important new friendships or deepened existing friendships with people like Don Kinderdick, Reed Bradford, Nancy Clanton, Gary Steffy, Teal Brogden, Chip Israel and others–all friendships that remain a very important part of my professional life today.

An educational grant is ultimately about the students. I’ve heard back over the years from several former students, who began and in some cases have continued their careers focused on exterior lighting, in part because of the new class they took at CU Boulder that was developed through The Nuckolls Fund support.

Here’s an example from a student who took the Advanced Lighting Systems class from me in the Autumn Semester 2001, graduated in December 2001, and then went to work for a major exterior luminaire manufacturer. In March 2002, this former student sent me an e-mail that said in part:

“Hey, I was at an informational meeting the other day with Color Kinetics. They were talking to us about LEDs and possible applications for them in our fixtures. It was pretty cool, because I was one of the few people at the meeting who kind of knew about LEDs from our Advanced Lighting class.”

That’s the sort of impact you dream about as an educator, and that’s why The Nuckolls Fund grants are so important to our industry. The Board has been receiving stronger new ideas from educators, and we’ve become more proactive in talking through the proposer’s ideas ahead of time so that they understand the Fund’s mission and can incorporate it into their proposal.

The Nuckolls Fund Board is always looking for creative ways to reach out to the design and design education communities. We encourage them to propose programs that will advance the reach of innovative instruction in the art and science of lighting. 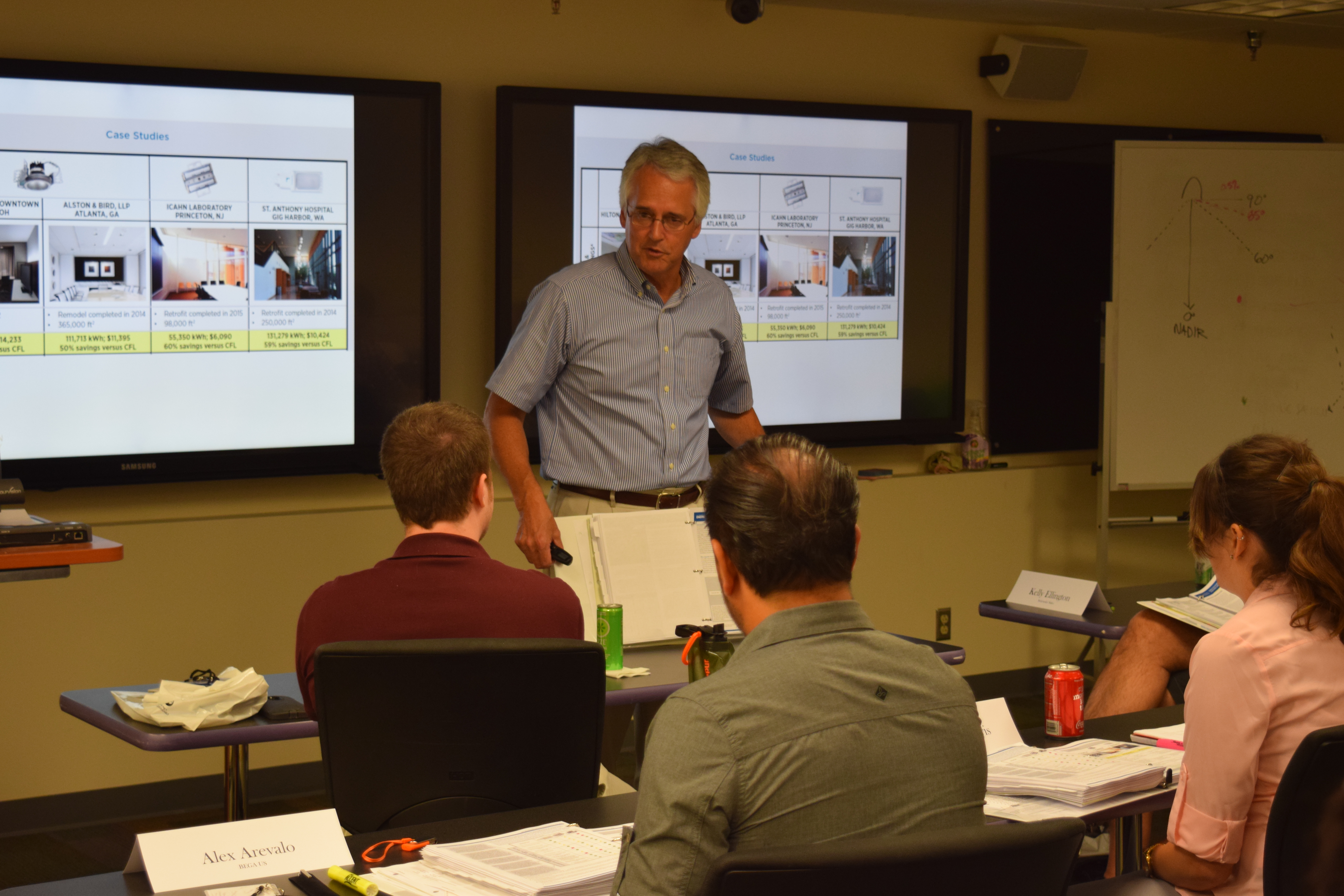 About The Nuckolls Fund for Lighting Education

The Nuckolls Fund for Lighting Education was established in 1989, and presents annual grants and student awards for lighting education in North America. It is named in honor of the late lighting designer and educator, James L. Nuckolls. To date, the Nuckolls Fund has awarded a total of $995,000 to individuals and teams to pursue projects selected by the Fund’s Board of Directors.

Proposals for the 2017 Nuckolls Fund for Lighting Education awards and grants are due on February 6, 2017. For further details, visit www.nuckollsfund.org to download the current grant RFP, or to make a donation to the Fund.