For the twentieth consecutive year, The Nuckolls Fund for Lighting Education presented grants and awards at its annual Lightfair luncheon, this year totaling $60,000. Recipients included two educational institutions, a pair of lighting design students, and a lighting research team. In addition, to celebrate the Fund’s twentieth anniversary, a new grant of up to $50,000 has been added to the Fund’s programs for 2010.

Named in honor of lighting designer and legendary lighting educator James Nuckolls, the Fund’s financial support of lighting education has grown annually. From a single $5,000 gift to Pennsylvania State University in 1989, the Fund has now awarded a total of $610,000. Contributions and bequests are donated to the Fund by lighting design professionals and firms, as well as organizations, manufacturers, sales firms, and distributors in the lighting community.

The addition of the $50,000 award was announced at the luncheon by Jeffrey A. Milham, Fund president. “The Fund’s Board of Directors initiated this expanded financial incentive to encourage the submission of an increased number of proposals for its consideration,” Milham explained. “We believe that there are many more creative ideas for lighting education that we want to learn about and support,” Milham said.

Retiring from The Nuckolls Fund Board of Directors this year are Patrick Sears, a 17-year Board member, and Emma Price, who served for 12 years. Their positions are being filled by Robert Davis of Litecontrol and Barbara Horton of Horton Lees Brogden Lighting Design. Grant proposals are reviewed by the Fund’s Board who select the recipients based on concept, originality, and a summary of projected benefits. Submittals for the next Nuckolls Fund for Lighting Education grant awards are due February 5, 2010.

At the twentieth annual awards luncheon of The Nuckolls Fund for Lighting Education, Evan Bellovin of Legion Lighting (l.) presents the $5,000 Jonas Bellovin Scholar Achievement Award to Darlene Myrie of Parsons The New School for Design, New York. Fund president Jeffrey A. Milham (r.) presided over the ceremonies held during Lightfair 2009. The Fund has awarded a total of $610,000 since its founding in 1989. 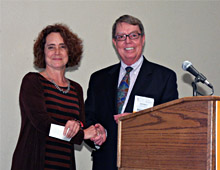 Patricia Seitz, director of the Graduate Program in Architecture at the Massachusetts College of Art and Design, Boston, accepts a check for $20,000 from Jeffrey A. Milham, president of The Nuckolls Fund for Lighting Education. Presented at the Fund’s twentieth annual awards luncheon held at Lightfair, the grant was named in honor of Lesley Wheel, legendary lighting designer and teacher. Prof. Seitz will add two new introductory lighting design courses, “Lighting for a Sustainable Future,” to be taught in sequence. 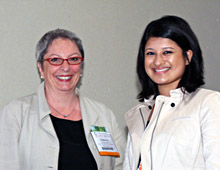 Barbara Horton, (l.) of Horton Lees Brogden Lighting Design, New York, is shown with Alriah Pereira, who was awarded the $5,000 Jules Horton International Student Achievement Award. Ms. Pereira is a student at Texas Christian University, Ft. Worth, in its Center for Lighting Education. Ms. Horton is a member of the Fund’s Board of Directors. 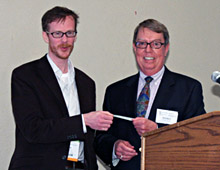 Conor Sampson (l.) from McGill University, Montreal, will apply the $10,000 Edison Price Fellowship Grant to the development of automated daylighting and daylight controls guidelines. He received the check from Jeffrey A. Milham, president of The Nuckolls Fund for Lighting Education. Sampson will also prepare case studies of buildings which incorporate sustainable lighting strategies. 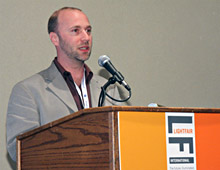 Prof. Glenn Shrum of the Maryland Institute College of Art described the success of the “Lighting Concepts and Applications” course that was funded by a 2004 $20,000 grant from the Nuckolls Fund for Lighting Education. Shrum illustrated how the course became a catalyst in the growth of MICA’s lighting program and the expanded lighting lab.