Sixteen students at Pasadena’s Art Center College of Design participated in a hands-on, year-long workshop course to produce prototypes of high-design lighting products from low-tech materials. Working with such diverse sources as loofah plants and plastic bags, they created such products as an LED-powered woman’s vest and functional wall and ceiling-hung luminaires.

The course, Light, Materials and Technology, was made possible by a $20,000 grant from The Nuckolls Fund for Lighting Education, initially awarded to the Art Center in 2007. “Recent developments in LED technology have resulted in smaller, cooler, and brighter LEDs and flexible LED strips,” says Penny Herscovitch, who co-directs the Center’s Environmental Design Department with Dan Gottlieb. “We urged our students to invent ways in which these LEDs could be integrated into tactile, flexible, and sustainable materials for objects that can be used in interiors, or worn,” she indicates.

In 2009, the Nuckolls Fund for Lighting Education awarded $60,000 for educational programs and research related to the training of professional lighting designers at U.S. educational institutions. The Fund commemorates the late lighting designer and lighting educator James L. Nuckolls. Now in its twentieth year, the Fund has distributed over $610,000 in grants and awards. Financial support comes from contributions by manufacturers, professional organizations, design firms, and individuals active in the lighting industry.

Students participating in the Art Center course conducted experiments to determine low-tech manufacturing techniques to illuminate their lit objects. “The course offered the students an opportunity to practice a whole new way of thinking about and utilizing light,” Herscovitch says. Completed projects also had application to the students’ other courses such as hospitality and exhibit design. Herscovitch and Gottlieb co-managed the course for the Fall 2008 and Spring 2009 terms. They documented the students’ projects from early concept through fabrication and final presentation that will be a permanent record of the Fund’s success in stimulating original solutions by U.S. design students for the interpretation of lighting. 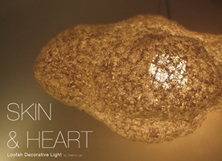 La Crespi: A shirt light by Jason Pi
The La Crespi group of floor, table and pendant lights are made from ribbed tee shirts that were manipulated, twisted, wrapped, treated with non-toxic fabric stiffener, then sculpted into a circular form. A 32-W CFL provides illumination. Student Jason Pi proposed teaming up with Homeboy Industries, a nonprofit organization dedicated to teaching gang members new skills to help them escape the streets and earn a living wage. 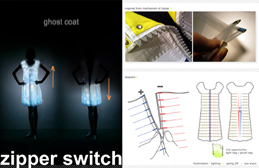 Ghost Walker illuminated vest by Soo Kwon
The Ghost Walker illuminated vest creates a ghost-like silhouette of the wearer as she zips up the vest. The garment is constructed of an inner and outer layer. Several surface-mounted LED ribbons are affixed to a fabric substrate and connected to the zipper via stitched conductive thread and wire. As the zipper passes by each ribbon, it closes the circuit and illuminates them sequentially. The surface-mounted LED flexible ribbon has three LEDs spaced every two inches. The nylon fabric functions as a diffuser. 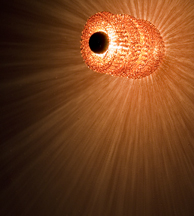 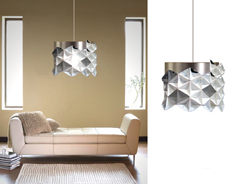 Plastic bag pendant by Yoo Seon Hyun
A pendant light was fabricated from heat-fused plastic bags, folded into an intricate origami form. This project is an example of a functional recycling use for the 100 billion plastic bags that are thrown away each year in the U.S. The fixture contains an 11-W CFL lamp.